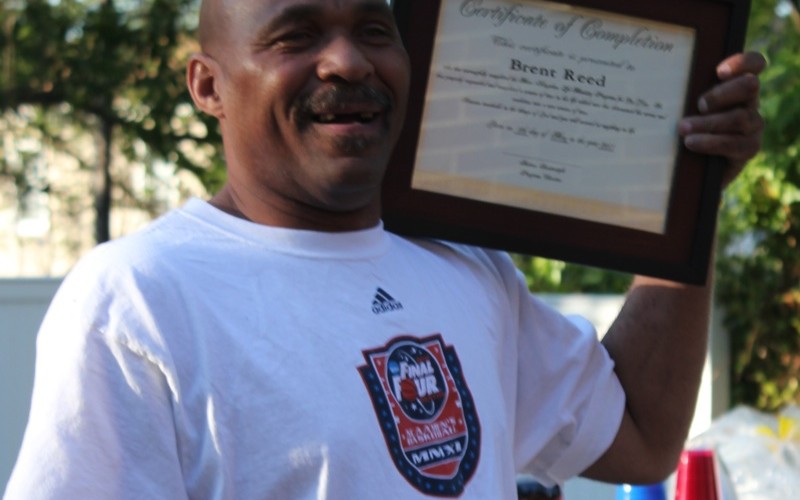 After an over 30 year battle of addiction and multiple incarcerations, Brent Reed turned his life around because of Kingdom Life Ministries (KLM). During his last incarceration, he knew his life had to change – and he was ready to change after 30 years of hard drug use and street life.

Upon his release in May of 2010, he immediately moved into KLM’s recovery house and upon graduation, became the program director and a recovery coach for KLM. As a man in his 50’s, he overcame the apprehension and fear and enrolled in college at the University of Phoenix and pursued (and ultimately got his degree) in substance abuse counseling. He enjoyed speaking to classes in order to change their lives – we went to George Wythe multiple times to speak to the students and encourage them not to follow the path Brent did. We went to VCU and spoke to criminal justice classes so these future police officers and practitioners would understand the “other side.” He loved studying the bible and engaging friends and family in such discussions.

Brent was diagnosed with leukemia in the Spring 2012 and after chemo, blood  transfusions, and ultimately pneumonia, he passed on October 11, 2012. Yesterday, Wednesday October 17, we celebrated his life at a memorial ceremony at Ft. Lee Baptist Church.

Brent was among the first few men I met when I started in the Jail 4 years ago. He was one of the men who ensured my security while on the tier. I was with him when he first stepped foot out of the jail when he was released. We had many long conversations about his recovery and his thoughts on enhancements of the program. Hours after he was told he had 2 weeks to 6 months left, he immediately said he had to speak to at least one more group of people to share his story. I arranged for him to speak to a VCU Criminal Justice class. He loved that opportunity. He also requested that I teach him how to use power point and to help put a presentation together for school – we never got to do that!

Brent’s goal remained to save as many lives as he destroyed. He was already ready to share his story and talk about his recovery and walk with Christ. He would always tell you the honest truth about what he thought about situations. He inspired many men to change their lives – he was looked at by many as “if Brent can change his life, I can too.”

While his body is gone, his message of recovery and his mission to save many lives will live on through work we continue to pursue with KLM, through this tribute video I created, and other videos and testimonies we have from him! However, I miss him already – and there are many other people who do. He will continue to be greatly missed! Rest in peace Brent!

Brent’s tribute video can be seen by clicking here!