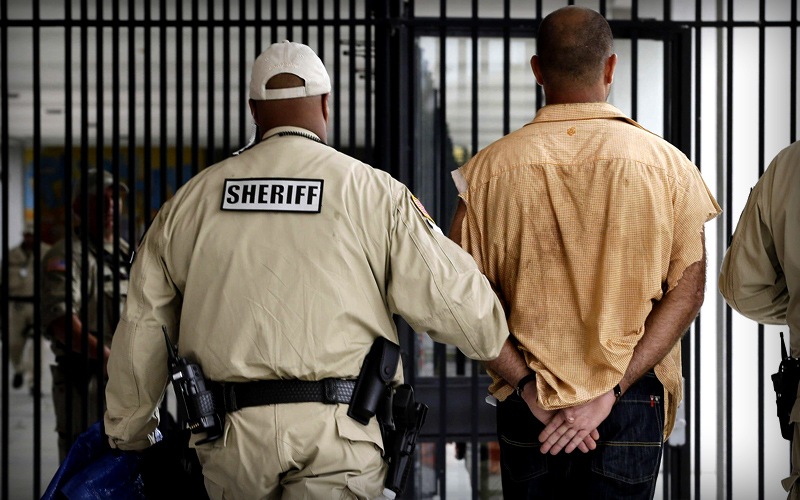 We know that violence in the jail is a problem. Many of the fights lead to hospital and emergency room visits, which is a direct cost to us. Inmates do not have insurance, and legally cannot be denied services, so the cost of treating these uninsured individuals is passed on to those who do have healthcare through our premiums. Non-violent criminals often learn how to become violent. Violent offenders frequently learn how to become more violent. More drug contacts and enemies for the street are met. Deputy morale is decreased when dealing with such situations, and the safety of the deputies and other jail personnel is drastically decreased.

This is certainly not something that is easily overcome, however. Locking up criminals from varying backgrounds, neighborhoods, and gangs, is bound to lead to negative behaviors. Therefore, drastic measures need to be taken in order to overcome these difficult dynamics.

Demonstrating the severe violence of the Kingdom Life Ministries (KLM) tier in the Richmond City Jail, prior to KLM’s  beginning, one of the program participants stated:

“On my first visit to the Richmond City Jail in 1994, I was placed on the F2 tier. It was an experience I would never forget. On my first night here I experienced four drag down, knock out fights. It was something like the wild-wild west, only no guns, but plenty of bloodshed. I can’t go into graphics, but I saw heads opened, eyeballs knocked out, etc. It was based on what part of Richmond you were from and if you had enough homeboys to protect you. It was like the gangs of California (Crips and Bloods).  F2 was the worst tier to be put on for years. Now, I have been here for 8 months. It has been like going from a war setting to participating Sunday School. There hasn’t been one physical altercation since the program has started. It has been a pleasure being on the tier.”

This is a pretty extreme transformation. And, spending so much time on this tier with these men, I can attest first hand this is absolutely true. So how did this happen? It was first, because of Sheriff Woody’s passion and desire for the inmates of his jail to receive rehabilitation and to stop coming back to the jail. He opened his doors and allowed the program to work in his jail – on the worst tier. He gave me unprecedented access to conduct research to document how it was happening and to determine if it was effective.

The program came in and worked with the men on a full time basis. They worked long hours with behavior modification curriculums, to include handling emotions, anger management, dealing with conflict, relationship development, and other like topics. Most of the men are addicts, but addiction to drugs and/or alcohol is only part of the problem. It is an addictive personality and lifestyle that they battle and as such, it is these addictive personalities that need to be overcome and focused on. It was long hours of concentrating on these topics that truly turned the behaviors around.

The tier was almost inmate-policed, which is very different that the operation of other tiers in the Richmond City Jail and other jails in general. While ultimate authority of the tier belongs to the Sheriff and jail personnel, the tier follows a model of peer monitoring among the inmates themselves. Following such a model not only lead to decreased violence and fighting, but also established responsibility and accountability within the jail’s inmates.

A senior member of the community is named Captain of the tier. He is obligated to enforce the guidelines set forth upon entering the program and to act as intermediary between the administration and residents. The Captain should have assistance from men who are referred to as LTs (Lieutenants). The LTs should be about an eleven to thirteen person ratio. If a resident is excelling in the program, including doing his work, putting an effort toward his recovery, and maintaining a good attitude, he is eligible to become an LT. He facilitates daily meetings for his group, ensures appropriate behavior, addresses any issues within the group, and discusses the process of recovery. The LT should hold position for approximately two to three months and then other men should be given the opportunity.

There is a community meeting (meaning everyone on the whole tier participates in this meeting) each evening and LTs rotate leadership responsibilities for these meetings. In addition, there are several monitors, who enforce the tier policies regarding television use, noise levels, and tidiness. In explaining the tier’s leadership, one resident stated:

“Behavioral modification program…uses a peer-based model that utilizes nine leaders to help keep the community in order. They ‘police’ their selves, and as such, deputies do not interact with this tier as much as other tiers.”

In order to ensure the structure is maintained, “we start from day one with a structured life that will lead in a positive direction — not a negative one.” There are strict rules to compliment the structure, which include no stealing, oral altercations and assaults, and physical altercations. Each of these infractions has different punishments, which may include privileges being taken away (phone, TV, food, outside visitors, etc.) or getting kicked off the tier, depending on how serious the infraction is. These sanctions are decided upon and enforced by the LTs. Additionally, there is a strict weekly schedule, which includes a time to get up, work out, eat, and go to bed.