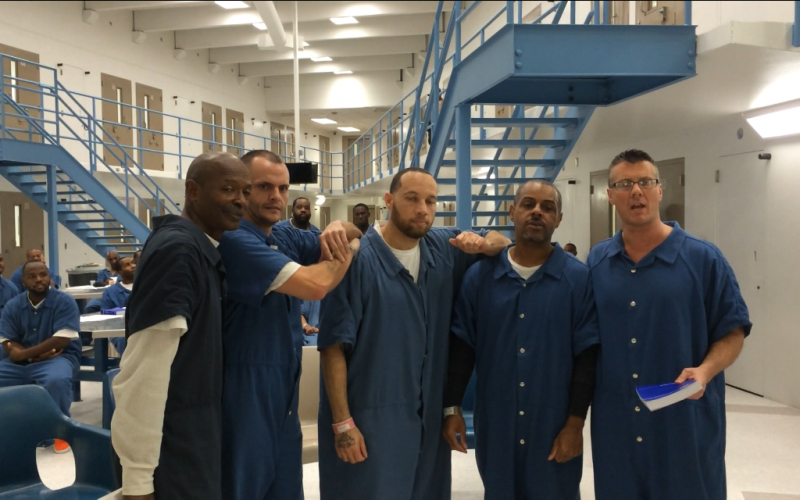 For 25 years, hundreds of thousands of Americans have celebrated their sobriety and brought awareness to addiction during September’s celebration of Recovery Month. Spearheaded by SAMHSA (Substance Abuse and Mental Health Services Administration), Recovery Month ‘promotes the societal benefits of prevention, treatment, and recovery for mental and substance use disorders. ‘

Many organizations across the nation have large celebrations for recovery month. From 5K races, to film screenings, rally’s, BBQ festivals, dances, sporting events, and musical festivals, these events are hosted and sponsored by organizations whose mission is to bring awareness to the disease and promote the successes they have encountered.

Putting a creative twist on this year’s theme to “Join the Voices for Recovery: Speak Up, Reach Out,” the program participants in the Richmond (VA) City Justice Center (RCJC) decided to take a stand and recognize Recovery Month behind bars. As a spin off of the ALS Ice Bucket Challenge, the RCJC’s program R.E.A.L. (Recovering from Everyday Addictive Lifestyles) has issued a challenge of their own – to remain clean and sober! Take a moment to watch this video – the men did a fantastic job! If you accept the challenge – post your video using #REALRCJCchallenge and make sure to tag the Facebook page of where it was originally posted – Sheriff C.T. Woody, Jr.

The notion of inebriety was the common idea across the spectrum.  This concept encompassed a large variety of disorders that were a result from either drug or alcohol addiction. At this time, inebriety was referred as a “term that captured the morbid craving, the compulsive drug-seeking, and the untoward physical, psychological and social consequences of drug use” (Crothers, 1893).  There were many types of inebriety, including: “alcohol, opium, cocaine, toabccoism, ether, chloroform, coffee, and tea inebriety” (Crothers, 1893).

The modes of treatment continued to evolve as the issue of addiction continued to be prominent.  A “continuum of care” developed as doctors began to refer addicted patients to detention facilities for detoxification and evaluation (Crothers, 1902).  Placement of these individuals in long-term facilities began because short-term treatment was not effective.   Other physicians referred patients to different types of treatment facilities, including urban detention centers, short-term homes providing a period of recovery, and larger homes that provided long term treatment.  One of the largest challenges during this time period was convincing the patient to remain in treatment, while also remaining sober (Crothers, 1902).

Various treatment institutions were run a differently, but had the same basic concepts, as many do today.  Treatment included a combination of spiritual, psychological, and physical treatment.  Isolation from the stress and temptations found in their daily life was the first step in treatment and towards detoxification (White, 1998).  Intimate support and relationships between the staff and patient encouraged mutual support and a sense of family.  Work and recreational activities were included as part of the treatment program. Work encompassed manual labor and recreation included activities such as croquet, music, theater, and debates.  Music was also seen as therapeutic; therefore, providing availability to various musical instruments.   Counseling was occasionally seen as a form of mental treatment, however, was not provided often.

Alcoholics continued to occupy beds in jails, farmhouses, medical hospitals, and psychiatric hospitals; however, they eventually began to seek assistance from the private sector.  As soon as the private sector began to provide these services, the state institutions started to emerge, resulting in competition between the two entities, which is still apparent today.  In a review of the treatment provided by private institutions, Corwin and Cunningham found, “they offer a refuge to patients who are frequently refused help by other more sanctimonious hospitals” (Weisner & Room, 1984).

More recently in the past few decades, the delivery of transition programs for inmates has been dependent upon the prison and parole systems. During the 1950’s and 1960’s, the objective of incarceration was rehabilitation, and therefore facilities provided halfway houses and transition programs for those who were close to release. Throughout the 1970’s, pre-release and work-release programs were the available transition programs to offenders.  The 1980’s consisted of ‘day reporting programs,’ but only a few municipalities executed. In each of these programs, the individual was “half-back under correctional custody,” by being able to work during the day, “earn money, and make arrangements for basic shelter and clothing needs, while also seeking to obtain long-term employment and re-establish relationships with family and friends” (Taxman, et. al, 2004). Yet, while working “freely,” they were still monitored for progress and to ensure they are remaining on the right path.

The treatment arena began to change to more of a political setting, with many people and correctional staff displaying their reluctance to provide treatment and rehabilitative services because they felt as if “offenders were undeserving of help because they had violated the tenets of society; few correctional wardens had a favorable attitude towards these services” (Pogrebin, 1978). The main focus of this time period was safety in the prisons and not on rehabilitation or re-entry. With this turn towards safety, funds were taken from educational, vocational and other programs within jails and prisons. Further, the numbers of substance abuse treatment programs were also decreased during the 1980’s.

Today, the focus on substance use disorders has significantly increased, in large part because of the voices coming forward to bring notice to the movement and celebrations such as recovery month! Thank you SAMHSA for spearheading such a great effort! Sobriety can happen and recovery works!