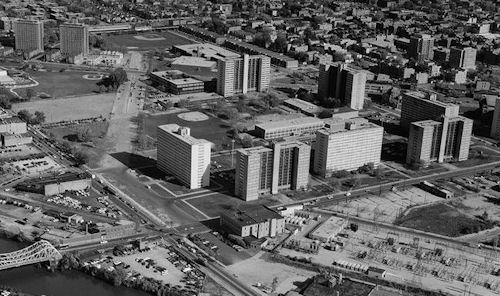 An Inquiry into the Origins of Social Disorder

The conventional wisdom in housing-reform circles these days emphasizes the need to bust up concentrations of poverty. When  Mayor Dwight Jones recently explained his thinking behind Richmond’s latest plans to inject mixed-income housing into the City of Richmond’s desolate East End, he said he wanted to change the culture of poverty. Poor people need models of success. They need to see people subjecting themselves to the discipline every morning of getting up and going to work. Mix poor people with working- and middle-class people, the thinking goes, and some of those bourgeois virtues will rub off on them.

Without realizing it, Virginians are reprising a discussion that took place in the 1930s, ’40s, ’50s and ’60s. In “Blueprint for Disaster: The Unraveling of Chicago Public Housing,” University of Chicago professor D. Bradford Hunt chronicles the public policy decisions over a half century of slum-clearance and public housing initiatives that created the infamous Cabrini-Green housing projects, now demolished, and other incubators of crime and social breakdown. The debates in Chicago paralleled those in other cities across the country, including, no doubt, Richmond.

A key thesis of Hunt’s book is that it wasn’t the concentration of poverty in Chicago housing complexes that led to a downward spiral of ungovernable youths, vandalism, crime, gangs, physical destruction of property and the flight of anyone and everyone with the means to escape. It was the concentration of young people. In essence, Chicago’s public-housing towers became Lord of the Flies set in a concrete jungle.

Chicago had public housing for the elderly where crime was never a major consideration. But housing projects consisting of apartments with multiple bedrooms and large families became war zones. Writes Hunt:

Widespread social disorder emerged in Chicago’s high-rise projects shortly after they opened in the 1950s and early 1960s, before poverty became entrenched, before jobs disappeared in black ghettos, before the [Chicago Housing Authority]‘s finances collapsed, before deferred maintenance meant physical disorder, and before the drug scourge ravaged tenants. … CHA planners produced communities with youth-adult ratios several magnitudes greater than any previously seen in the urban experience.

Ironically, the concentration of youth resulted from progressive social engineering. “Reformers had long proclaimed with both sentiment and social science that public housing’s main beneficiaries would be children saved from the evils of the slums,” Hunt writes. Based on that premise, they excluded childless families from the projects. Child-adult ratios soared and social disorder ensued.

The child-adult ratio is an issue that has received astonishingly little attention from social scientists and politicians, Hunt contends. It’s not too late for Richmond authorities to consider the implications of his argument.

Richmond never built the Cabrini-Green- or Pruitt-Igoe-style high-rise projects that made Chicago and St. Louis synonyms for dysfunctional public housing. Indeed, Richmond’s projects conform more closely to the emerging 1950s suburban ideal of  one- and two-story buildings set in cul de sacs and surrounded by large amounts of open space. Mosby Court and Creighton Court never had to deal with broken elevators, poorly lit stairwells and other features that rendered Cabrini-Green uninhabitable. Kids had plenty of room to run and play (although the landscape was barren). But the Richmond housing projects, launched with so much hope and good intentions, followed a similar path to social disorder. Why?

Hunt’s insights into Chicago housing offer one possible explanation. If Richmond’s public housing had the same high ratios of youth to adults, the few resident adults may have found swarms of adolescents impossible to discipline by traditional means of social control. It would be interesting to go back through the records of the Richmond Redevelopment & Housing Authority to see if Cabrini-Green’s youth-to-adult ratios prevailed.

There is another aspect of this issue that Hunt does not raise (at least not in the first two-thirds of his book, which is all that I have read yet): changing family structure. I would argue that intact, two-parent households are more effective at regulating the activities of their children than are households headed by single mothers. While there may be adult males living with the single mothers, they often are not the children’s fathers and feel no responsibility for raising them. Combine a project with a high child-to-adult ratio and households headed by unwed mothers — especially if those mothers were themselves raised in a permissive and unregulated environment — and you have a recipe for social breakdown.

Housing authorities need to be attuned to whom they admit into the mixed-income housing they plan to build in the East End. It is not sufficient to have families that are “not poor.” A household with a single working mom and two kids might qualify by her income as working-class or middle-class and, therefore, would count toward the goal of creating a mixed-income community. But if that household contributes to a skewed youth-adult ratio, and if there is no father to contribute to raising and disciplining the children, it could well perpetuate the negative social dynamic of East End poverty.

I don’t pretend to have the answers. I’m just asking questions. But I’m not persuaded that city leaders have the answers either. I fear we shall spend tens of millions of public dollars on a roll of the dice pursuing the latest intellectual fashion without really knowing what we’re doing.