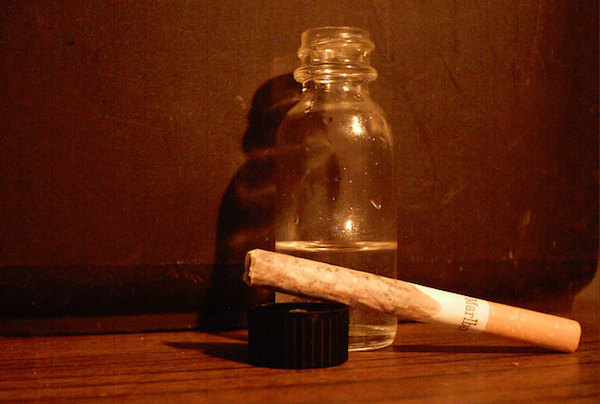 Phencyclidine, “PCP,” also known on the street as “wet,” “water,” “angel dust,” “ashy Larry,” or “butt naked,” is an anesthetic and hallucinogen. PCP causes users to be senseless and often brings a psychotic violent high that can be triggered at any moment; the PCP high that can last up to 24 hours.  Because combining toxic chemicals makes PCP, including potassium cyanide, users completely disassociate from reality.

Originally made in 1926, and then brought on the market as a legal anesthetic drug in the 1950s, its hallucinogen, disorientation, and manic powers were discovered and thus was removed as a pharmaceutical drug 15 years later (Kapur and Seeman, 2002). It then became a known street drug used primarily in large cities in 1967 (Inciardi, 1992). In the late 70s, PCP was said to be the number one drug problem in the U.S., although use of the drug has consistently been lower than that of other drugs. Yet, as crack markets have been targeted, PCP has become more popular because it is cheap, easy to use, and not hard to hide.

PCP, in its pure form, is a white crystal powder. On the illegal drug market, however, there are various chemicals mixed in that taint the pure white – it looks more like apple juice, much like other synthetic drugs, such as Molly discussed in last week’s blog. Dealers often stretch their supply by combining ether, starter fluid, and/or benzene, leading to the user not knowing what other chemicals they are getting. Often, PCP is so toxic it can eat a hole in your skin if spilled on it.

While it can come in a powder form, PCP is most often trafficked as a liquid. It is not typically made on the East Coast, so dealers must develop relationships with dealers on the West Coast and have it shipped to them. Upon receipt, the dealer then soaks the end of a cigarette in the liquid – the “dipper” is then smoked. One cigarette dipped, depending on how much of it is dipped, costs between $15 and $30.

PCP brings a different reality to users; often it is a self-medication for those who battle mental health or depression. It is a way to escape pain, suffering, and poverty. While used to self-medicate, PCP strongly affects the brain and often causes serious mental health disorders, including the most severe disorder of schizophrenia (Reynolds, et. al, 2005 and Murray, 2002). When users feel alone, they often turn to their “best friend” – PCP, “it never lets me down,” one user explained. However, once they come down, reality is present again, and the cycle starts all over again.

A moderate dosage makes users feel detached from reality. They feel numb, have slurred speech, and loose coordination. Hallucinations, mood disorders, and distortion of sights occur – the level of affect is most often related to dosage. Yet, if other chemicals are mixed in, stronger effects can be felt. Seizures and comas, sometimes resulting in death, occur. However, death more often occurs during a PCP high by suicide or accident.

One of most frequent effects of PCP is that it causes people to strip in public. The internal body temperature rises and they take off all of their clothes – sometimes a PCP user will be seen naked running around while there is snow on the ground.  Prostitutes also often use PCP because it acts as an aphrodisiac and boosts the sex drive.

Violence caused by PCP is the most dangerous and concerning part. Harm is often inflicted on others, including stabbing and killing, because of what the user is hallucinating and thinks is reality. Users also have no sensation of pain, thus there are reports of users gauging out their own eyes ball and biting metal until they break all teeth their out. Multiple murders and the most horrific crimes have occurred when individuals are “zooted” or “lunched out” on PCP. It is said that there is no other drug or substance on earth that motivates such evil and horrendous behavior.

California rapper Big Lurch murdered his girlfriend by smashing her rib cage, ripping open her chest, and then eating her lungs when on PCP. He thought she was the devil and reacted in a manner that resulted in life in prison. After the incident, he was found naked and covered in blood in the middle of the street.

Rapper Houston forced out his own eyeball after he was unsuccessful committing suicide.  He protested that he was Jesus and he wanted to see his Father in heaven. Houston remains in a mental institution.

PCP is highly addictive and leads to a psychological dependence and craving. It interferes with hormone and growth development. Memory, weight loss, depression, and hardship with speaking and learning can last up to a year after use.

As reported by “Drugs, Inc.” on National Geographic, Washington DC has the highest rate of PCP use in the United States – most frequently it is found in the south east sector of the Capitol city – this is the poorest and most crime ridden segment of the city. There are over 400 PCP busts annually in DC. Emergency rooms treat approximately 80 PCP patients each month. The majority of them must be tied down to the hospital bed because they become so violent. Treating PCP patient in hospital for 12 hours can cost upwards of $12,000.

The majority of people who have used PCP warn others not to use the drug. Likewise, many users who have done multiple drugs refuse to try PCP due to the known dangers and behaviors associated.