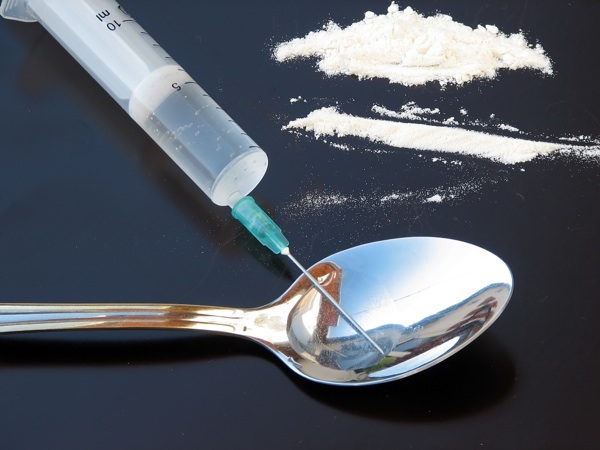 Heroin, short for diacetylmorphine or morphine diacetate and most commonly carrying the street names of H, smack, horse, brown, and black tar, is derived from morphine, which is obtained from the opium poppy. An opioid analgesic first produced in 1874, heroin combines two acetyl groups (which is derived from acetic acid) with morphine. Using the resin of poppy plants, opium is refined to make morphine, then further refined into different forms of heroin.

Heroin is commonly from Afghanistan; in 2004 approximately 87% of the world supply of raw opium came from Afghanistan. Yet from 2007 to 2011, the rate of production in Mexico significantly rose, elevating Mexico to the second largest opium producer in the world.

A tar-like substance or white to dark brown powder, drug studies have revealed the highly addictive nature of heroin. Depending on the purity of the drug and preference of the user, heroin can be injected into a vein (referred to as mainlining), injected into a muscle, smoked in a water or regular pipe, mixed in a marijuana joint or in a cigarette, inhaled as smoke through a straw (referred to as chasing the dragon), or a powder snorted through the nose.

Heroin is used recreationally for the extreme euphoria and transcendent relaxation it causes. Use causes an immediate rush, especially when injected, thus intensely pleasing the user. When injecting, after the instant euphoria, a warm sensation on the skin, heavy limbs, and a dry mouth occur.  A sleepy feeling follows the euphoria.  Also happening after use: speech becomes slurred, movements and walking are slow, eyelids begin to sag, vision is weakened, constipation, and vomiting. Heroin is a depressant that teases the brain’s pleasure system, thus meddling with the brain’s capacity to recognize pain. Mental functions become foggy because of the depression placed on the central nervous system.

Gilbert H., house manager of Kingdom Life Ministry a non-profit substance use treatment program, was a long time heroin user and explained that heroin is “not just mental, but physical too because of the effects on the body. It makes you sweat and irritates your stomach. If you don’t have enough in your body, you can’t eat and you throw up. Heroin also makes you lose weight and lose your complexion. My immune system was very low when I was using.”  Issues developed because of ‘not having enough in your body’ are because the body begins to go through withdrawals as soon as a few hours after use. Other withdrawal systems included restlessness, diarrhea, cold flashes, bone and muscle soreness, and goose bumps, among other systems.

Honesty L., CEO of the McShin Foundation, another non-profit drug treatment program in Richmond, shared “Heroin was different than the other drugs I used to do because it would physically make me sick if I didn’t have it.” Honesty began using weed and LSD and drinking alcohol when she was 12. “When I found heroin at age 17, it all went down hill. I overdosed, was brought back to life, went through therapy, medical detoxes, treatment, and other programs during 9 years of heroin use.”

In addition to the addiction and physical dependence to heroin, regular users often develop poor health conditions.  The most serious conditions typically include collapsed veins, infection of the heart lining and valves, cellulites, boils, and liver disease.  Pneumonia and other pulmonary complications are frequent among users, as well as respiratory problems.

Street heroin often has additives that do not dissolve, causing obstruction of the blood vessels that lead to the lungs, kidneys, brain, or lungs. This can result in toxicity or death of patches of cells in the vital organs. Making matters even worse, regular users build immunity to heroin, resulting in heightened use to experience the same effects and intensity.

Like many drugs, heroin makes people do many things they would never have done if sober. Gilbert explained, “having the substance in your body, you are selfish. Everyone who was using is on the same level of trying to get more. You steal and rob to get the money to get more of the drug. You con people and are on the street begging for more.”

Honesty recalled, “I did so many bad things just to get money or heroin.  I HAD TO HAVE it daily with no question.  I was mentally and physically dependent on it.  On heroin I was a different person and being in withdrawal from it I was even worse.  I wouldn’t eat if I didn’t have money; I needed my money for heroin.  My daughter was born addicted to heroin and had to detox in the hospital.  I didn’t care about a soul, as long as heroin was in my life.”

Approximately 9.2 million people in the world are said to use heroin.  The 2007 National Survey on Drug Use and Health reported 153,000 current heroin users in the US in 2007. Other estimates give figures as high as 900,000.

Testimony from a former heroin addict and graduate of the Kingdom Life Ministry Program:

“Hello, my name is Karl G. There may be some of you who read this and know me or just who can identify. I am a life long recovering addict. Each day and night I get down on my knees and thank my God for saving me from a life of heroin use. At times and moments I say to myself, what a relief, as I think of two of the brothers who were in the recovery house with me who are now locked back up and the many friends who died from overdoses – some I witnessed right there on the spot and left them there when they couldn’t be brought back. All the violence that’s alive each and everyday, the not knowing, the gambling each time you shoot-up that it’s not going to take you out because once it hits the bloodstream there is nothing you can do about it – that’s the sick day in and day out stuff we heroin addicts went through. This is the reason I called it quits.

If you are an addict, I strongly suggest that you allow God to come into your life and have you too, standing as His miracle for all the world to see, that you too, have made it out of your heroin addiction. All the Power and Glory to the God Almighty! From a recovering addict, please let go of that addiction, because you too then will find out about the saying! It’s beautiful, so for real beautiful on this side of the street. Join me!!!!”