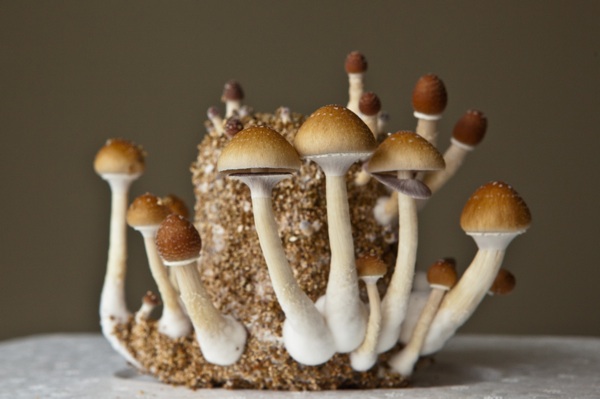 Hollywood often misrepresents the intense high felt by those who use mushrooms; they portray the high with dragons flying out of people’s faces or brick walls melting into nothing, which does not happen, even with strong doses.  What frequently does happen, however, is that objects that are physically in existence appear to float through the air or turn into something with astonishingly elaborate patterns. Surfaces may slowly ripple into waves as if it has come alive. While visuals are certainly intensified and insignificant items become extremely exciting as if it’s the first time they are seen, typically visions of things that are not there does not occur.

The change in perception tends to be a users favorite part of the high. When looking in the mirror, the face transforms back and forth from being the ugliest thing ever seen to the most beautiful thing ever seen. When looking at objects, the same experience occurs – a couch might shift from beautiful to ugly, evil to nice. Perceptions move from extreme to the other. This is also where a “bad trip” occurs – users get stuck in a negative state of mind and cannot escape it. The high really tugs at the users ego, further contributing to the bad trip. This is when people engage in bad or negative behavior and their life or the life of others can become endangered. Further dangers are present for those who have mental health illness, as it can trigger schizophrenia and other diagnoses.

Use can also cause horrible back pain. Many say this is caused from the poisonous preservatives used to keep the drug from evaporating.

Mushrooms are psychoactive drugs – meaning a chemical substance goes through the barrier that separates the circulating blood from the brain fluid in the central nervous system. This affects the functioning of the brain, leading to changes in mood, perception, behavior, cognition, and consciousness. Because of the changes that often bring about euphoria, mood changes, and other experiences, psychoactive drugs, such as mushrooms, are often abused, despite the negative consequences and health risks.

Because of paintings on rocks found from the North African ruins, it appears that mushrooms were present in Mayan and Aztec cultures in Central America dating back to 9000 B.C. The Aztecs used a product called teonanácatl, which means, “flesh of the gods,” that many think were magic mushrooms. Along with other products that were grown, such as morning glory seeds, they were eaten as to create a daze, hallucinations, and so they could talk to the gods. In fact, in the 16th Century when Spanish Catholic missionary priests came to the New World, some even wrote about the use of these substances that would affect the brain, visuals, and perceptions.

In the late 1950s, magic mushrooms began to be eaten by Westerners. In 1955, R. Gordon Wasson, a mycologist (one who studies mushrooms), was traveling through Mexico to study mushrooms. During this time, he observed and partook in a ceremonial service that used magic mushrooms. The ceremony was led by a witchdoctor of the Mazatec, a native living in the Oaxaca area of southern Mexico. Published in Life Magazine in 1957, Wasson wrote an article entitled “Seeking the Magic Mushroom” where he discussed his experience.

Timothy Leary, probably the most well known champion of brain altering drugs, such as mushrooms and LSD, read the Life magazine article and was fascinated. After this point, magic mushrooms became indistinguishably associated with the hippie age and the exploration for a fresh method of spirituality. As such, a ban, except for medical research, was brought forward in the 1970s.

Most mushroom farmers grow P. cubensis mushrooms, really because it is the easiest type to grow. Psilocybin, the psychedelic compound produced by over 200 different types of mushrooms, is a Schedule I drug under the Psychotropic Substances Act of the Controlled Substances Act. By being a part of the Act, it is deemed to have the likelihood for abuse, has no acceptable medical use, and is not safe for use even under medical directives.

In many states, it is illegal to have magic mushrooms in any stage, including spores (the ‘seed’ that grows into a single mushroom). Further, using paraphernalia and intent to sell laws, many states bring forth charges for all items related to mushrooms or growing them.

Prior to the Drug Enforcement Administration’s (DEA) heightened attention to mushroom kits in 2003, U.S. farmers were buying spores from other countries. While possession and selling of magic mushrooms are still legal in some countries around the world, dried mushrooms are illegal almost everywhere. Since 2000, more countries (especially in Europe) have made them illegal.  It was not until 2005 that it because illegal to sell mushrooms in Great Britain, however, possession of spores is still legal.

SOMETIMES IT’S JUST TOO MUCH TO HANDLE

As one man describes, he closed his eyes as the mushroom high began to kick in. He slowly began not to be able to feel his body and then it was if he was dead. He described it as a ‘fascinating’ feeling. However, after opening his eyes, the feeling that he was dead would not give and he could not come out of the ‘dead feeling.’ After taking a shower, making himself throw up, and splashing cold water on his face, he gave up. He went outside and had no idea where he was and could not recall his own name. Eventually the extreme high wore off, but terrifying while going through it.