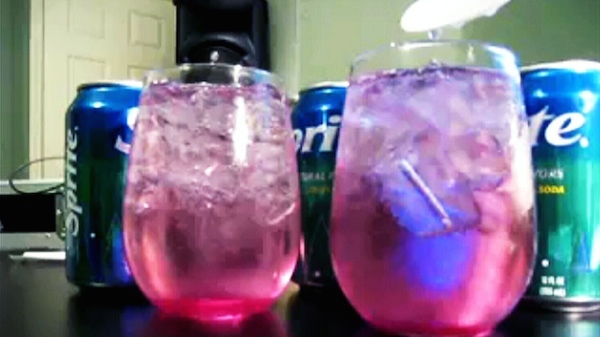 Originating in Houston, Texas in the 1960s and then spreading through the United States after glamorized by rap artists, Sizzurp is a mixture of prescription cough medicine containing codeine (the active ingredient), sprite, and often jolly ranchers. The cough syrup (and jolly ranchers) give it the purple color, which is why it is often referred to as ‘purple drank.’  Typically the amount of cough medicine added to the sprite is more than 25 times the recommended dose. Sizzurp is a very sweet drink, making it easy to drink and sip on all day. Thus, by the end of the day, users often have not realized how much they have drunk and frequently by that time have seizures or overdose.

The codeine, which is an opiate, creates the euphoric feelings. The cough syrup also contains a drug called promethazine, which acts as a sedative. The mixture of the two make your mind and body separate; it makes users literally have to hold on something to stand up, it makes them lean over – thus the nickname “lean.”  Physiological effects of purple drank on the user is to produce mild “euphoric side effects”, which are coupled by “motor-skill impairment, lethargy, drowsiness, and a dissociative feeling from all other parts of the body” (Leon, 2013).

Consuming too much codeine and promethazine can weaken the respiratory and central nervous systems, causing the heart and lungs to stop. Nausea, dizziness, impaired vision, memory loss, hallucinations, and seizures are often reported effects as well. Because of the high dose of codeine, which is a narcotic, it becomes very addictive. Needless to say, sizzurp can be deadly, especially when mixed with other drugs and alcohol.

Pharmaceutical manufacturer Actavis announced in April 2014 they would terminate production and sales of Promethazine Codeine after widespread media attention was placed on sizzurp. Rap star Lil Wayne collapsed and suffered several seizures from the drug. Justin Beiber and Soulja Boy are often seen in pictures posted on Instagram and other social media sites with bottles of prescription cough syrup, purple drank, or Styrofoam cups (which is what it is known to be drank out of). It has also been linked to the death of rappers Pimp C in 2008 and Big Moe in 2007.

While the cough syrup with codeine is only available legally with a prescription, it has been seen to sell for up to $800 on the black market; this trend is likely to continue. As the drink is continued to be glamorized in music and among the rap artists, we will unfortunately most likely see more and more deaths related to sizzurp and codeine.