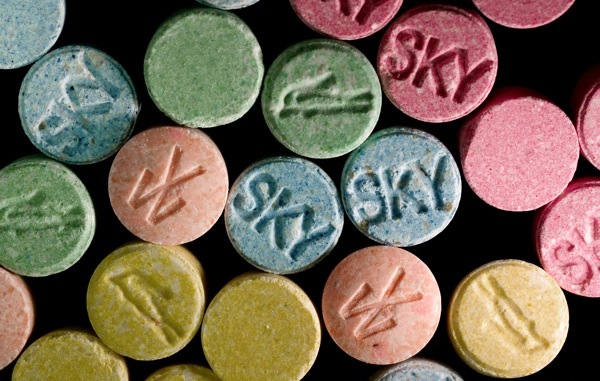 3,4-methylenedioxy-N-methylamphetamine, MDMA for short, or in colloquial terms, ecstasy, is a psychoactive drug that generates distinct social and emotional senses. A stimulant and psychedelic drug, it produces energy, in addition to distortions in time, perception, and enjoyment. Referred to as “E,” “X,” “Adam,” “hug drug,” “beans,” “love drug,” or “XTC,” the drug intensifies the feelings of intimacy and decreases anxiety and surreal visual and sound effects. The chemical causing stimulation from ecstasy is similar to that found in methamphetamine. The drug is most often thought to coupling with dance parties, raves, and techno music. In fact, ecstasy has become one of the most popular drugs among youth today since it is the ‘club drug’ and the ‘rave drug.’ Over the past couple years, the number of emergency room visits associated with ecstasy has increased by 1,200%.

In 2008, the UN estimated between 10 and 25 million people have tried ecstasy – similar to the numbers associated with the use of cocaine, amphetamine, and opioids, but much less than the number of marijuana users.   The main effects are on the brain and the neurons that use the chemical serotonin to communicate with other neurons. The serotonin system plays a vital role in regulating mood, sexual activity, aggression, sleep, and reaction to pain.

Some users enjoy the depressing effects of the drug, while others use it as fuel at parties because of its stimulatory feelings. Effects kick in about 30 to 60 minutes after use, with the peak being between 75 and 120 minutes. The high lasting for about 3 ½ hours, is following by a few hour long come down that causes tiredness, toxicity of the jaw (apparent through trembling and clenching), difficulty sleeping, and insomnia.

Regular users of ecstasy perform worse than non-users on memory and cognitive tasks. Some studies have shown memory problems among users, yet there is some research that contradicts this fact. With high amounts of use, it can interfere with the regulation of body temperature, which can result in failure of the liver, kidneys, or cardiovascular system. It also negatively affects metabolism and the breakdowns of food in the body. Risks associated with cocaine and amphetamines are also seen among ecstasy users, including chills, fainting, blurred vision, increased heart rate and blood pressure, heart disease, circulation problems, and muscle tension. The psychological system can also be affected, such as depression, confusion, anxiety, and sleep deprivation.

MDMA was sometimes within the therapist community to treat clients who experience fear or post traumatic stress disorder (PTSD) until it became illegal.  A study of the effects of MDMA conducted by Liechti, Gamma, and Vollenweider, revealed the following: being non-personable, distorted awareness of space and time, optimistic mood, bi-polar like experience, apprehension, anxieties over the loss of thought or body control, hallucinations, significant change in the senses, and exaggerated imagination. On an “Adjective Mood” rating scale, moods that increased significantly included: self-confidence, enhanced mood, worry, angst, thoughtfulness, contemplatives, sociability, stupefied state, sympathy, and emotional increases.

One of the most risky factors of using ecstasy are the hidden risks. Ecstasy is often sold in a non-pure form, including the parent drug of ecstasy, MDA (methylenedioxyamphetamine), and PMA (paramethoxyamphetamine), which has been associated with fatalities in the U.S. and Australia, both of which are toxic and create additional risks. Further, other substances may be mixed into the MDMA tablets, including caffeine, meth, and cocaine, making them even more dangerous.

The Drug Enforcement Administration recognizes ecstasy as an illegal Schedule 1 drug because it has no recognized medical use.  Penalties for possession or distribution of the drug range from 4 years to life in incarceration and/or fines between $250,000 and $4 million.