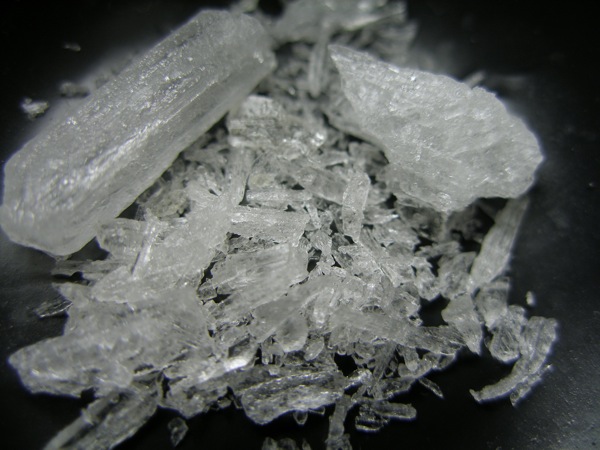 Methamphetamine “meth” is a synthetic stimulant that affects the central nervous system. It combines the hyperactivity from cocaine and the delusions of LSD. It was created to deceive the brain – keep you up for days, make you not hungry, or make you believe you have more power than you really do.  “Meth teases you – it promises you. It tells you – look, I know you are tired all the time, but take me and you can make it – and get the girls, the car, and the job.  It’s hard to escape it – your life is controlled by it – I couldn’t live with it or without it. If I was off meth, the come down was terrible – the crash – I couldn’t deal with it, so I would do more,” Joey B., a meth user of about 5 years, explained to me.

Meth causes psychotic behavior, where all senses of reality are completely lost and strong delusions occur, as well as hallucinations, excessive paranoia, and obsessive-compulsive behavior.

Immediate brain damage, as well as damage accumulated over time, occurs from meth use. Meth damages systems in the brain that control emotions and the ability to experience happiness. As such, exhaustion occurs, as well as confusion and thoughts of suicide – all leading causes of meth-induced depression. Long-term cognitive crippling can also occur, resulting in losing the capability to learn and use verbal skills and engage in basic motor skills. A tolerance is built up, disabling a person from experiencing pleasure. Usage compromises brain systems that regulate impulsive behaviors and over stimulate the same areas, leading to aggressive and violent behavior.  Meth provides an addiction quicker than any other drugs; it trains the brain to think that using meth is the only way to experience pleasure and feel good. Both short and long term memory are crippled. Because of the effects on the frontal lobe, the ability of judgment, impulse control, and determining consequences are destroyed. This leads users to engage in behaviors they never would have before. Movements such as twitching, jerking, and tremors are uncontrollable. Obsession with one thing can occur for hours, where the same task if performed over and over again. Hallucinations and delusions of hearing and seeing things that are not there occur often. Critters are felt crawling on skin, referred to as “meth bugs,” as well as believing people are spying on and out to get them.

In addition to severe brain deficiencies that meth users experience, their body also severely suffers. Hair often falls out.  Body temperature rises significantly with use, which can cause increases in heart and respiratory rates, in addition to organ failure and brain damage. The increased heart rate can lead to heart attacks, stroke, and irregular heartbeats.  Involuntary muscle contractions occur, resulting in irrepressible twitching and bizarre movements.

Teeth and gum rotting is typical, occurring from bad hygiene, grinding, bacteria, and the acid in the meth. Open sores are common among meth users because of hallucinations that make users think they have bugs crawling under their skin – they scratch and try to dig them out. A suppressed appetite causes the loss of muscle tissue and bone density.   Graying skin, open sores, and acne are a result of the skin’s blood flow being restricted.

As alluded to in the previous paragraph, meth can destroy people’s faces in a matter of months – so bad they often become unrecognizable. Just google “meth” and look at the images of the destroyed faces.  Joey B commented, “my teeth did decay – I switched from smoking crack cocaine to crystal meth, so once I was done using, I had to spend thousands of dollars at the dentist.  My face didn’t sink, but a lot of addict friends got sunken faces – they had bumps and scratches – they would see a bump and pick and dig at it. Because of sleep deprivation, the hallucinations are a lot worse than with other drugs – my user friends would look at self in mirror and hallucinate and just pick and dig at their face.”

Meth creates a false sense of happiness. From the first use of meth, it begins destroying the users’ life because of how highly addictive it is and the false powers it provides. “Meth is one of those drugs that I am scared to come in contact with,” Joey B. explained.  “If I did it once again, I would be gone. I enjoyed it – I haven’t enjoyed any other drugs like I enjoyed meth because it brings you things – it promises you things. Meth would combat feelings so I wouldn’t have to take anti depressants.”

Today, bath salts are the cheap form of meth. In fact, many people are now selling bath salts and passing it off as meth. A couple years ago, Joey B. had to try bath salts because they say it’s like meth. He said, “it is like meth, but has other side effects – hallucinations and instant paranoia.”

– Over the next few weeks, the blogs will discuss various drugs and the affects on the user. I hope you enjoy this series to come –

~~ The story of meth user David W. who is a part of the Caroline County (Virginia) Recovery Community Program:

“I started using cocaine around the age of 20. After about a year, I was using every day – I never robbed, stole or dealt – I just used.  Very seldom did I use alcohol when on coke. Cocaine made me, as everybody, very alert and aware.  I did coke for about 10 years almost everyday, then discovered meth and it was on.  I had found my drug of choice.  I used every day for 15 years; meth to me was like coke, but lasted a lot longer.  I got married during this time and had a daughter. I would sleep 3 or 4 hours a night.  The longest I went without sleep was 4 days. I kept my job I’ve had for the last 20 years and was able to function in society – I attended PTA meetings and my daughter’s sporting events.  Most people did not know – they thought I had a high metabolism. During meth use, I tried to restore two cars; I took them apart but they never got them back together. At the end of my use of meth, I started having problems with my marriage – we were separated twice and I did things I shouldn’t have. During this time I had a serious porn collection.  The wife had two mental breakdowns.  We lost our home to foreclosure because of meth.  I got lucky and never got caught or had any legal problems.  I tried to stop twice. The second time I tried to stop I took 3 large bottles of sleeping pills and a fifth of Jim Beam, 3 days later I woke up in my own feces, went to a rehab in Florida. I started having nosebleeds and had to have sinus surgery because of coke and meth use.  I never shot up, only snorted. Drugs and alcohol have taken a lot but never gave back anything.  My wife and I are back together now, the meth affected her a lot longer after stopping. We lost homes and cars because of drugs and we thought it was ok or normal.  It takes a while after stopping to realize what really “normal” is.”