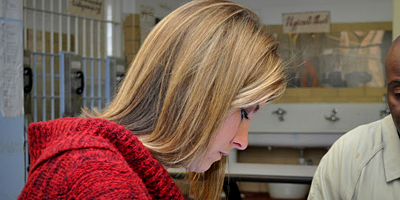 The River City Givers recently presented Sheriff C.T. Woody, Jr with a donation for the non-profit REAL Life, a program designed to support the efforts of Sheriff Woody’s Recovering from Everyday Addictive Lifestyles (REAL) Program. The check, in the amount of $5,300, was presented to the Sheriff, as well as Program Director, Dr. Sarah Scarbrough and the Internal Program staff, to bolster rehabilitation, recovery, and re-entry efforts post release.

Getting to the Root of the Addiction

It is no secret that drug use throughout the United States continues to soar. Overdose deaths linked to substance abuse continues to rise, despite massive national attention and efforts to address it. Although millions of dollars are being spent to curb this epidemic, more people are tragically losing their lives. The consequences of this epidemic are devastating: mothers and fathers are having to bury their children; kids are losing their parents far too soon; teenagers are losing their best friends.

REAL house will help men on their post jail journey

The Recovering from Everyday Addictive Lifestyle (REAL) Program inside the Richmond City Justice Center now has another resource to keep men on the right path when they have been released from jail.

Sarah Scarbrough, director of internal programs at the jail, developed the idea for the series after researching other re-entry programs and finding that most were outdated and singularly focused on a topic such as probation or job preparation.

Scarbrough runs the REAL — Recovering from Everyday Addictive Lifestyles — program at the jail, but she wanted a resource for every inmate, men and women, that addresses every question they might have about starting life anew.

“Sarah told me, ‘That’s not a good look,’” Greene said referring to the tattoo on his cheek. “‘That’s the old Charlie.’ I understood what she was telling me.”

Sarah is a one of a kind person with the biggest heart of anyone I know. She is the internal director of programs at the Richmond City Justice Center. She spends her days giving offenders another chance. She created the REAL program; Recovering from Everyday Addictive Lifestyles, which helps RCJC residents learn skills to succeed after their release. Many of the residents look to her as their "mom," she loves them like she loves her own children. She learns from the residents like they learn from her. She wants these individuals to come back into our society as better citizens. I don't know anyone like her - She gets up every day and GOES to jail and helps those that some people think aren't worth helping. I think because of her actions, she makes RVA a better place to live.

The obstacles stacked against you don’t stop there, and we haven’t stopped there....You see potential in people that sometimes they do not see in themselves.

Dr. Sarah Scarbrough, internal program director at the new Richmond City Justice Center located downtown near Mosby Court, is innovating her “Recovering from Everyday Addictive Lifestyles” (REAL) program to provide RCJC residents with the tools and skills to succeed after their release.

There’s soft spring in her step as she chasses through the echoing hallways of RCJC to collect homework assignments from her class of residents.

"Sarah Scarbrough stands a few inches above 5 feet tall. The 33-year-old from Chesterfield County is not an intimidating presence, but when she walks into Pod 6E, notorious in the Richmond City Justice Center for housing the worst criminals in the jail, the inmates quiet down, sit up a little straighter, and smile."

"Sarah Scarbrough exudes passion and pragmatism. She’s internal program director for the Richmond City Justice Center in Virginia (formerly the Richmond City Jail), and she’s serious about giving offenders another chance. To help these most disadvantaged, dismissed members of our society, Scarbrough takes a holistic approach in partnership with other agencies and the community at large."

Three hours. Imagine being locked up for a year or more and then getting to spend three hours with your daughter. You get to put on a suit and connect with her. What would you tell her? What happens when the three hours ends and you have to replace the suit with your prison clothes?

"Drug dealer or businessman? To Sarah Scarbrough, the answer is sometimes both. As the jail's internal program director, her goal is to help inmates redirect the intelligence and savvy they've developed on the streets toward legal endeavors."

Dr. Sarah Scarbrough recently received The NCADD Bronze Key.
The Award is a national recognition award granted by the National Council on Alcoholism and Drug Dependence for Affiliate presentation to an individual or organization that has made an outstanding contribution to the field and the Affiliate. It is the highest local award presented by Affiliates.

"A wide variety of government and not-for-profit programs endeavor to help. The problem is, the quality of programs varies widely and it is very difficult to say objectively which ones are effective and deserve more funding, and which ones are worthless and deserve to be terminated."

“New research by recent graduate Sarah Huggins Scarbrough, provides strong evidence that Kingdom Life Ministries, a peer-based program for Richmond City Jail inmates with substance abuse problems, succeeded in reducing the number of inmates who stay out of jail upon their release.”

“On any given day, rehabilitation and recovery services are provided to up to 120 men in what used to be the worst tier of the Richmond City Jail. Upon release, KLM (<a href="http://klmrecovery.org">www.klmrecovery.org</a>) continues to provide re-entry and treatment services, including housing...”

“A study at the Richmond City Jail in Richmond, Virginia, found that participants in the Kingdom Life Ministries (KLM) peer recovery support services program had significantly lower criminal recidivism rates than either the jail population as a whole or participants in a separate Richmond City Jail program that provides peer recovery support services to individuals with alcohol problems…”

“At the time Timothy Green was imprisoned at the Richmond City Jail for convictions on charges including assault in 2008, only one of his seven children was speaking to him. Now that Green has stopped “drinking and drugging” with help from the Kingdom Life Ministries program, he said his son and six daughters all are back in touch.”

"The fight against substance abuse and recidivism is not hopeless," Scarbrough said during a news conference at which Richmond sheriff's officials touted the program.

“Participants in a faith-based program for Richmond City Jail inmates with substance abuse problems had an 18 percent lower recidivism rate than other prisoners, a researcher said Monday."

“A new study has found the Richmond City Jail’s faith-based program, the Men in Recovery, has helped some inmates stay out of jail upon their release.”

“Richmond’s sheriff says a study has shown that a program at the city jail lowered the recidivism rate for participants and saved taxpayers nearly $8 million over four years.”